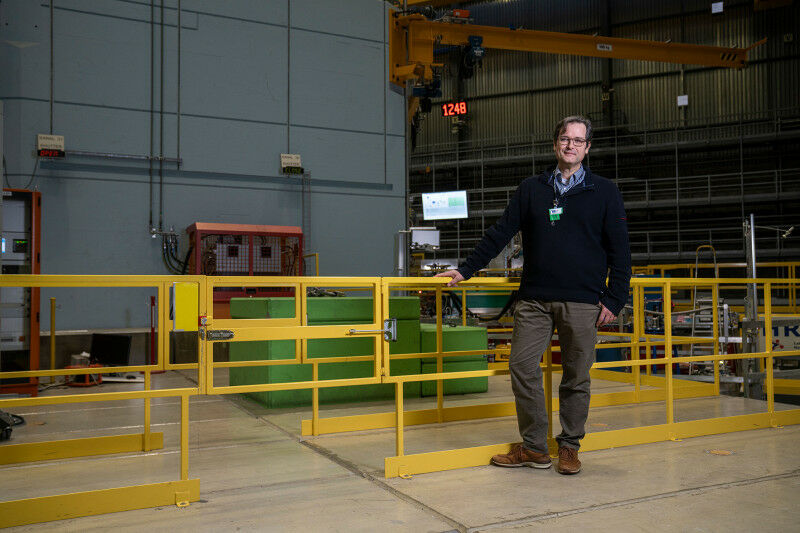 With the help of the Swiss Spallation Neutron Source SINQ, David Mannes, together with a team from ANAXAM and Audi, was able to precisely analyse the function of brake pistons.

Researchers at PSI have joined forces with employees of the technology transfer centre ANAXAM and the industrial partner Audi Sport to shed light on a potential sticking point: they have used neutrons to examine a brake calliper in action and reveal ways of optimising it.

Human lives depend on brakes. They need to grip quickly and return to their resting position immediately once the brake pedal is released. If they do not return fully, energy losses may occur. This is not noticeable to the driver and it doesn’t affect the function of the brake. It can, however, increase a vehicle’s carbon footprint. Researchers at the Paul Scherrer Institute PSI and employees of ANAXAM and the industrial partner Audi Sport have been exploring this phenomenon. They used neutrons from the Swiss Spallation Neutron Source SINQ at PSI to look inside a brake calliper, thereby demonstrating a way of visualising and optimising the movement of the brake pistons. The brake calliper grips the rotating brake disc like pincers. When the driver presses the brake pedal, the hydraulic pressure from the brake line pushes a number of pistons forward, which squeeze the two brake pads - one on either side - up against the brake disc, whereupon the high frictional forces bring the disc to a stop.

ANAXAM in Villigen is a centre for technology transfer, co-founded by PSI, which supports industrial companies wanting to use PSI’s research infrastructure.

The industrial partner in this project was Audi Sport. Mathias Kolb, a development engineer at Audi Sport in Neckarsulm, Germany, had contacted his former colleague Matthias Wagner, now a senior engineer at ANAXAM. Together with David Mannes from PSI, they came up with a method that allows them to look inside the brake calliper in real time and search for ways of optimising it. This has now been achieved for the first time at PSI. 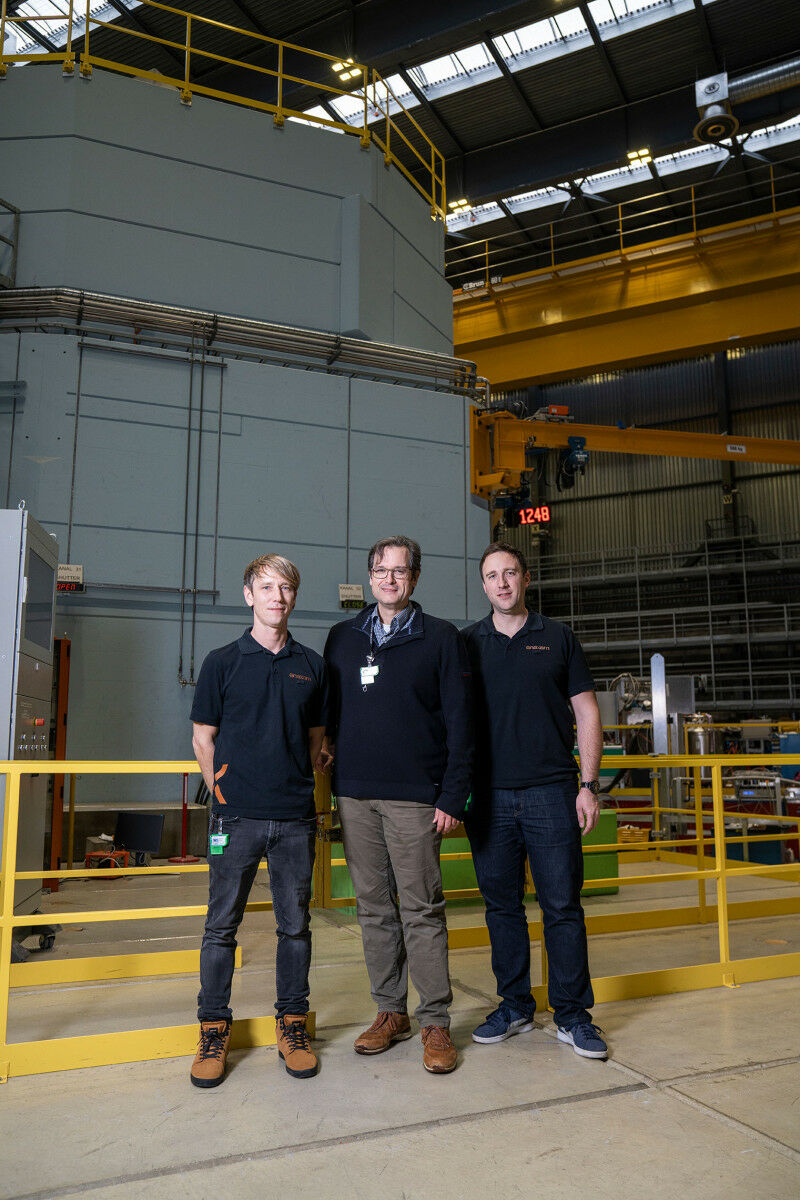 Phillippe Würsch (left) and Matthias Wagner (right) from ANAXAM appreciate the good and close cooperation with David Mannes from PSI, which was also successful in the case of the brake piston investigations.

The partners quickly realised that X-rays were ruled out by the fact that they are unable to penetrate metals. Neutrons are different: the aluminium of the brake calliper is almost transparent to them, yet at the same time they are highly sensitive to light chemical elements. This means that brake fluid, which contains hydrogen compounds, is clearly visible in the image. PSI provided the neutron beamline and its know-how for the experiments, which began in 2021 and were completed this year. The experiment was conducted at the Neutra beamline of the spallation source SINQ. A detector recorded the neutrons passing through the apparatus and ultimately produced a two-dimensional image from within the brake calliper.

ANAXAM mounted a brake calliper in front of the detector. The set-up was supplemented by a specially designed hydraulic system that produces realistic braking pressures of up to 100 bar. A climate chamber allowed the temperature of the brake calliper to be carefully controlled, simulating various operating conditions. Unlike on the road, the brake disc did not rotate during the tests. "This, however, could be an option for future tests, to achieve even more precise results," says Matthias Wagner from ANAXAM. That will probably not be necessary, though, because the completed series of measurements has already yielded numerous interesting findings.

The clearance is crucial 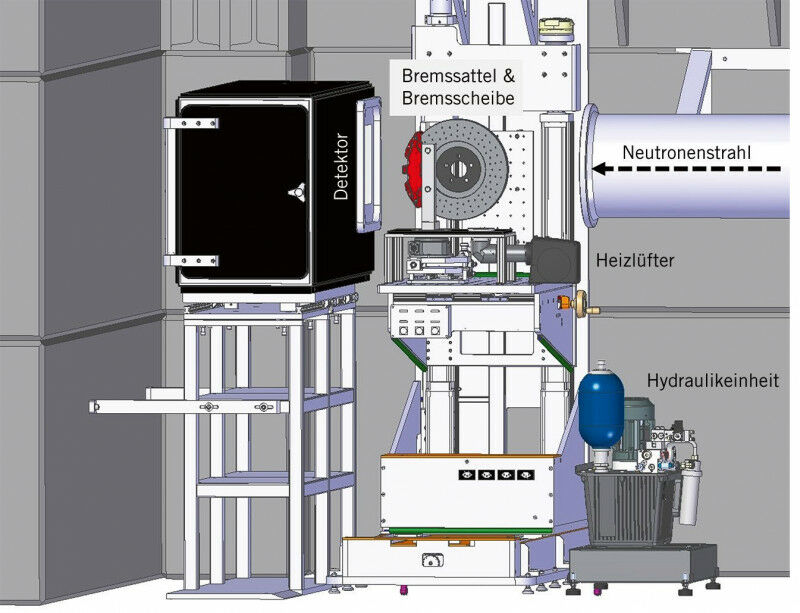 The analyses were carried out on the Swiss Spallation Neutron Source SINQ in a test apparatus specially made for the experiments. Among other things, various operating scenarios were simulated by increasing the temperature with a fan heater. (Graphic: ANAXAM)

The images recorded by the detector demonstrate impressively what neutron imaging is capable of. The brake calliper is clearly visible, with its six hydraulic pistons - three on each side. So are the tiniest deviations in the travel of the pistons. Here, it becomes apparent that the clearance of the lower piston actuating the outer brake pad - that is the distance between the brake pad in its resting position and the brake disc - is correct at 0.4 millimetres, whereas the other five pistons have a clearance of less than 0.3 millimetres. The investigators were also able to measure precisely how the brake calliper, shaped like pincers, bends outwards when the two brake pads exert pressure on it.

This project is a good example of how the scientific know-how of PSI and the competencies of ANAXAM can further improve a product that has already proven itself in series production. The industrial partner has further optimised the operation of the brake pistons, such that the clearance of the three pistons on the inner side of the brake calliper has now been increased by 0.1 millimetres when viewed under the neutron beam. This reliably separates the brake pads from the brake disc when the brakes are released. David Mannes from PSI: "Our research can contribute to reducing the CO2 emissions of road vehicles."