Gender differences in research recognition: a study demonstrates their extent and evolution

Founded in 1930 in the United States, the Econometric Society (ES) is one of the oldest and most prestigious scientific societies in economics. Becoming a Fellow of the Econometric Society is considered an honourable distinction. Yet, among the newly elected fellows, women are a minority: hardly absent until 1970, they were under 5% until the 1990s, recently rising to 20%. Do the numbers reflect a lack of qualified women or are they related to a lack of recognition of women’s academic work? And what is the cause behind the recent increase in female representation?

To answer these questions, David Card and Stefano DellaVigna (University of California, Berkeley), Patricia Funk (Università della Svizzera italiana) and Nagore Iriberri (University of the Basque Country) analysed ES appointments by comparing them with publications in leading scholarly journals in the field of economics. The research "Gender Differences in Peer Recognition by Economists" was published in Econometrica, the journal of the Econometric Society.

The ES membership selection process is an excellent case study for the analysis of gender disparities in appointment procedures: it is, in fact, a particularly selective procedure (in 2015, out of 1,500 scholars with at least three publications in top journals, 57 were nominated and only 12 were selected), but in contrast to the government or private sector appointments the authors have an indicator of the qualifications of possible candidates. Indeed, publications in leading journals, particularly Econometrica, are a good indicator of the possibility of being nominated and appointed. However, comparing male and female researchers with similar resumes, until 1979, there is a substantial negative gap in the selection of women: it is as if, to be evaluated on par with men, a woman had to publish one and a half more articles in Econometrica. From 1980 to 2009, there was a modest and statistically non-significant, positive gap that became significant in 2010-19 (corresponding to about one more publication in Econometrica). The same period also sees greater diversity in the geographical provenance of members. Factors that led to this change include some procedural changes, such as the introduction in 1995 of a Nominating Committee that gradually began to propose an increasing number of highly qualified female researchers as possible new ES members.

This research aims to quantify gender differences in research recognition in the academic community. Moreover, the authors also present some hypotheses on the mechanism. Regarding the negative gap in the number of women observed before 1979, one of the possible explanations is the so-called "Matilda effect," which leads to the underestimation or attribution to men of scientific achievements made by women. As for the positive effect observed in recent years, three hypotheses are presented. The first is that awareness of gender disparities leads to better evaluation of women’s academic careers, since women may face greater obstacles to achieve the same CV as men. A second explanation is that ES members tried to make up for the lack of recognition of female scholars in the past; in this case, we should expect a gradual reduction of this positive effect. A third possibility is that the members find it helpful to admit a proportion of women that is approximately equal to the ratio of women in the broader academic community. 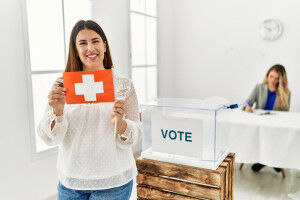