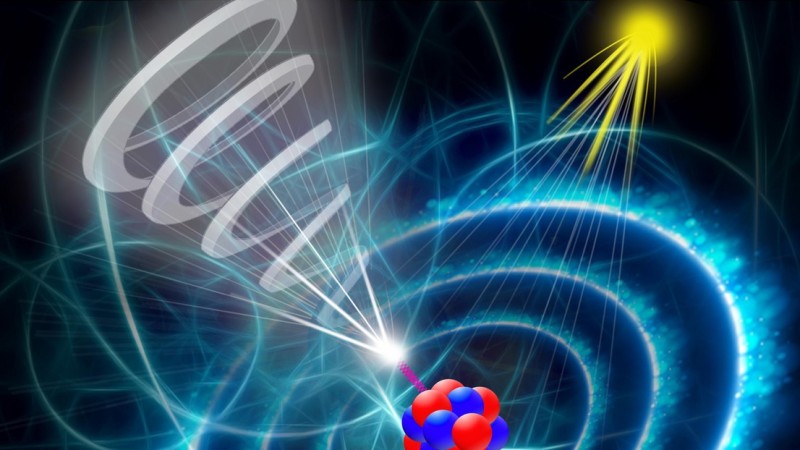 The capture of a twisted electron from an ion results in the excitation of the nucleus and the consequent emission of a gamma ray. Credit: F. Carbone (EPFL)

EPFL’s Laboratory for Ultrafast Microscopy and Electron Scattering has received a grant from Google to use shaped electron beams in the cutting-edge field of Nuclear Excitation by Electron Capture (NEEC).

Dr Fabrizio Carbone’s Laboratory for Ultrafast Microscopy and Electron Scattering (LUMES) today announced that Google has funded a 4-year research project in the lab. The project aims to exploit new methods recently developed at LUMES (see References below) to spatio-temporally manipulate the wavefunction of fundamental particles as a means of precisely effecting changes in an atom’s nucleus via Nuclear Excitation by Electron Capture (NEEC) .

The world needs more climate solution options in the form of cheaper clean energy. Dr Ross Koningstein at Google has been looking for ways to accelerate nuclear energy research and development of new scientific breakthroughs that could inform a path to clean and potentially very compact atomic energy sources without harmful products, a real game changer.

In 2018, Carbone asked if ultrashort electron flashes can help harvest nuclear energy , which caught Koningstein’s attention of. "The field of NEEC is at a nascent stage, with the first claimed experimental observation of NEEC by Chiara et al occurring only last year ( Nature paper ), and this has generated interest and discussions" says Koningstein. Carbone and his team were asked to collaborate with Google to create a research program.

Koningstein adds: "We acknowledge that there is a high scientific risk that the experiments will not succeed, but the potential rewards make funding this team’s proposal clearly a bet worth placing. If experiments can demonstrate the stimulation of specific types of atoms to undergo desired changes, this opens up possibilities for future compact sources of energy. We are excited to support this ambitious work of Dr Carbone and his lab at EPFL".

"We are delighted and honored to have "It will literally enable us to look where no-one has looked before. We will try to reach for the energy stored in the nuclei of atoms with new methods that are based on our recently developed capability to pattern the wavefunction of fundamental particles using nano-confined light. So far, high energy nuclear experiments have focused on collisions and interactions between fundamental particles, much like we see in the heavens how nature created elements and energy. In our lab, we have shown that we can modify the spatio-temporal characteristics of their wavefunction, and we hope to use it to affect their interactions. Our hope is for this project to deliver new environmentally sustainable tools to humanity for energy harvesting."

Towards a more affordable analysis of air pollution - 28.07