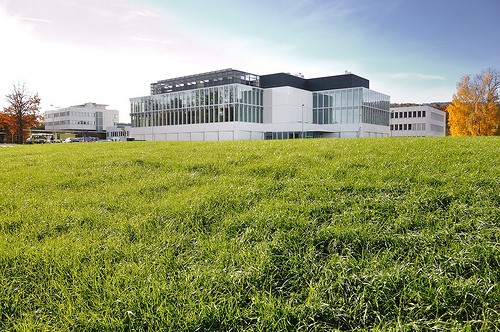 IBM  and ETH Zurich to open the Binnig and Rohrer Nanotechnology Center located on the campus of IBM Research – Zurich. The facility is the centerpiece of a 10-year strategic partnership in nanoscience between IBM and ETH Zurich where scientists will research novel nanoscale structures and devices to advance energy and information technologies.

Nanotechnology Center in Rüschlikon The new center is named for Gerd Binnig and Heinrich Rohrer, the two IBM scientists and Nobel laureates who invented the scanning tunneling microscope at the IBM Zurich Research Lab in 1981, thus enabling researchers to see atoms on a surface for the first time. The two scientists attended today’s opening ceremony, at which the new lab was unveiled to the public.

“Our partnership with the IBM Research Laboratory in Rüschlikon and its close proximity to the ETH Zürich is truly fortunate for us,” said Prof. Ralph Eicher, president, ETH Zürich. “With this new Nanotechnology Center, we bring our unique, long-standing and prolific cooperation to a new level. I am convinced that both scientific partners, as well as the Zurich region and the Swiss industry will benefit from it.”

EMPA, a Swiss national research institution under the umbrella of the ETH domain, is also a partner in the new center.

“This new Center represents a milestone in IBM’s centennial year and opens a new chapter in our long-standing tradition of scientific collaboration,” said Dr. John E. Kelly III, senior vice president and director of IBM Research. “IBM scientists will work side-by-side with our partners pursuing research to drive the future of information technology and nanoscience.”

Scientists and engineers from IBM and ETH Zurich will pursue joint and independent projects, ranging from exploratory research to applied and near-term projects including new nanoscale devices and device concepts as well as generating insights about their scientific foundations at the atomic level. Three ETH professors and their teams have moved into the new building and will conduct part of their research in nanoscience on a permanent basis. Even more ETH researchers will benefit from the partnership and be able to use the excellent infrastructure for various projects.

One focus of IBM’s research in the Center is put on exploring the “next switch”— the future building blocks for better, faster and more energy-efficient chips and computer systems. For example, IBM scientists are currently exploring semiconducting nanowires—tiny hairlike structures—to potentially increase the energy efficiency of computing devices by 10 times. In addition, through novel device concepts, such nanowire transistors could virtually consume zero energy while in passive or standby mode.

Researchers will also explore new approaches for fabricating structures and devices with dimensions down to a few nanometers, such as scanning-probe nanolithography or directed self-assembly, addressing the upcoming challenges for manufacturing at the nanoscale.

Nanotechnology is an enabling technology that is expected to spark advances in various fields. These include advanced functional materials, sensing, tools, healthcare, bio-analytics, water purification, energy technology, and more. In working with industry and partners, IBM scientists apply their nanoscience expertise to problems outside of nanoelectronics and help tackle some of the biggest challenges of our time, such as more efficient use of solar energy, and new ways of purifying or desalinating water.

A cutting-edge and sustainable environment

Research at the nanometer scale—one nanometer is the length of four gold atoms and 80,000 times smaller than the average width of a human hair—requires fabrication and characterization of nanoscale structures, whose level of accuracy is also at the nanometer or sub-nanometer scale. As a consequence of this scale, experiments are becoming increasingly sensitive to or limited by external disturbances.

The Binnig and Rohrer Nanotechnology Center offers a cutting-edge, collaborative infrastructure designed specifically for advancing nanoscience. The noise-free labs open up a new level of precision, thereby potentially extending the scale on which scientists are able to measure and experiment even further.

A large cleanroom for micro- and nanofabrication provides scientists from IBM and ETH Zurich with a flexible environment and tools for lithography, wet processing, dry etching, thermal processes, thin-film deposition or metrology and characterization. The cleanroom also features a special area for processing carbon-based materials and structures.

The new Nanotechnology Center will also continue IBM’s tradition of environmental awareness and is certified with the Minergie quality label, a Swiss standard for sustainable and energy-efficient buildings. More specifically, the Center improves its energy footprint with the use of photovoltaics, geothermal probes and heat recovery windows.

The building represents an investment of $60 million in infrastructure costs and an additional $30 million for tooling and equipment which, including the operating costs, are shared by the partners. *

In addition to these partnerships, IBM will also collaborate in the Center with scientists from several Lithuanian universities under a five-year agreement that was signed in September 2010 with the Lithuanian Ministry of Economy and Ministry of Education and Science. This collaboration will focus on integrated photonics and novel photonic materials to create faster computers, improved solar technologies, and nanopatterning security tags for advanced anti-forgery technology.

Centennial icon of Progress:
Scanning Tunneling Microscopy This year IBM celebrates its Centennial and, to mark this achievement, the company is highlighting its leading role in transforming business, science and society, while also predicting advances for the next century through a series of milestones and colloquia.

The discovery of the scanning tunneling microscope is one of IBM’s top 100 milestones, which are uniquely presented in an illustrated collection called the Icons of Progress.

The scanning tunneling microscope icon depicts a photo of IBM Fellows and Nobel laureates Gerd Binnig and Heinrich Rohrer with their first-generation scanning tunneling microscope design (middle) and one of the most famous uses of their invention; the spelling of “I B M” with 35 xenon atoms by IBM Fellow Don Eigler, which demonstrated the first controlled movement of individual atoms (right). Both breakthroughs depicted helped launch the field of nanotechnology (see Factsheet ).

Throughout 2011, IBM will host the IBM Research Colloquia, convening thought leaders at our global labs to discuss technologies of the future and their potential impact on business and society. The goal of the Colloquia is to bring together the IBM ecosystem of business, government and academia to help define the computing age of the future.

The first of these colloquia took place today at IBM Research – Zurich, and featured a dialogue on Nanotechnology and the Future of Computing with IBM Fellows and Nobel laureates Drs. Gerd Binnig and Heinrich Rohrer, and talks by Prof. Dr. Achim Bachem of the Jülich Research Center on 21st Century Supercomputing; Prof. Dr. Karlheinz Meier, Kirchhoff Institute for Physics at Heidelberg University and Prof. Dr. Daniel Loss of the University of Basel on Quantum Computing.