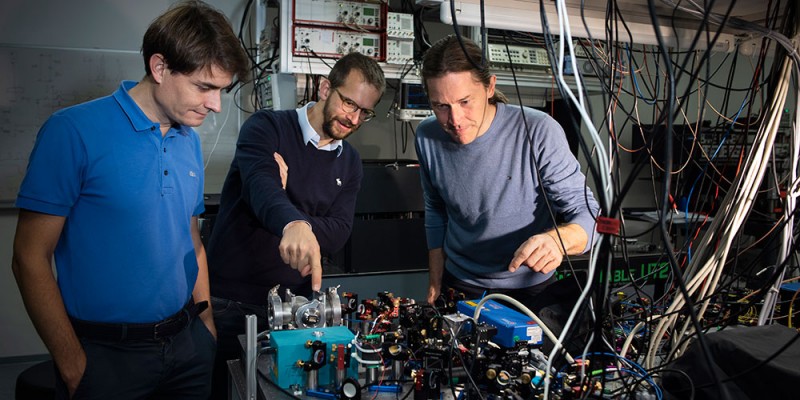 Today, the European Commission launched its flagship initiative on quantum technologies. Three research groups from the Department of Physics at the University of Basel are involved. The aim of the 1 billion euro research and technology funding program is to develop radically new and powerful quantum technologies by exploiting various quantum effects.

Quantum physics describes the behavior of matter at a microscopic level and forms the basis for the great technological revolutions of the last few decades. Without an understanding of quantum physics, computer and communications technology, laser and medical imaging techniques would never have been developed.

Until now, however, these technologies have not yet exploited the full potential of quantum physics, which allows for radically new phenomena: particles can be in a superposition of several states at the same time, or two distant, “entangled” particles can form such a strong unit that their properties are no longer independent of each other.

On the way to the second quantum revolution

In recent years, physicists have been able to show how they can not only observe these astonishing phenomena but also specifically control them and use them for completely new kinds of technology. These second-generation quantum technologies promise extremely powerful computers, secure communications, quantum simulators for basic research and pharmaceutics, and highly accurate sensors for use in materials science, navigation and medical technology.

Switzerland and other European countries are leading the way in university research on quantum technology. To also be at the forefront of the technology transfer to industry, the European Union has launched the Quantum Technology Flagship , a 1 billion euro funding program over a 10-year period that will give European quantum technology the decisive push towards becoming a market leader. About 140 international consortia of university research groups and industry partners applied for the first three-year funding period, of which only 20 were successful.

Researchers at the University of Basel are heavily involved in three consortia in the area of quantum optics and quantum sensing:

Result of a long-term strategy

The physicists’ success is the result of a long-term strategy. “For years now, the University of Basel has built a research focus in the area of quantum technologies, which has an excellent international reputation,” explains Treutlein, who is also the Dean of Research in the Faculty of Science. “This is also reflected in the successful acquisition of prestigious externally funded research projects, such as the Quantum Technologies Flagship.” The participating researchers, who belong to the Department of Physics and the Swiss Nanoscience Institute (SNI), are highly motivated to put their research findings into practice.