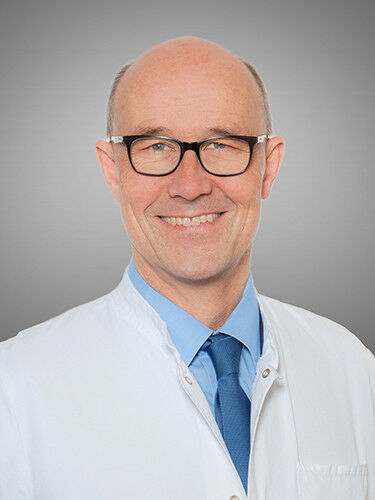 An interdisciplinary research team from the University of Basel and the University Hospital Basel has studied the effects of the Covid-19 booster vaccination on the heart muscle. According to their findings, which have not yet been peer-reviewed, mild damage is more common than previously thought. Cardiologist Professor Christian Müller talks about the results in an interview.

09 November 2022 Our focus was on rare but relevant effects of the first Covid-19 booster on cardiac muscle cells. Until now, this phenomenon has only been observed passively and has not been actively investigated. This means there was only data concerning severe cases of myocarditis, especially in young men needing hospital treatment. Our question was how often damage to the cardiac muscle cells actually occurs after the Covid-19 booster. In order to answer this question, we measured a marker called cardiac troponin in the blood of employees of the University Hospital three days after the booster vaccination. If the level of cardiac troponin rises above the normal range, this is an indication of damage to cardiac muscle cells. We also wanted to test how long such damage would last. (editors' note: please refer to the box at the end for more details on the study)

And what was the result?

We recorded elevated cardiac troponin levels in a higher percentage of vaccinated individuals than expected. From the previous passive observation of severe cases, it had been concluded that around 35 out of 100,000 vaccinated individuals would develop myocarditis. In our study, we found evidence of temporary mild damage to cardiac cells in 22 of the 777 participants - 2.8% instead of the anticipated 0.0035%. So there’s slight damage to heart muscle cells in almost 3% of the cases, which shouldn’t be overestimated, but also not ignored.

You say "temporary" - how long does this damage last and how dangerous is it?

I have to emphasize that this is a mild effect. Symptoms include shortness of breath, fatigue and possibly pressure on the chest, but as I said, they are rather mild and non-specific. We performed further investigation in the study participants with elevated cardiac troponin levels. On the following day, Day 4 after vaccination, cardiac troponin values were back in the normal range in around half of the 22 affected individuals. This marker is extremely sensitive - with other methods such as MRI we wouldn’t have been able to detect any damage to the cardiac muscle, as it only becomes visible once the damage there is about three to five times greater.

Does it make a difference whether an individual has already been infected with and recovered from COVID-19 before the booster vaccination?

It’s not yet possible to comment on this based on the data available so far.

In comparison, what percentage of those infected with Covid-19 suffer damage to cardiac muscle cells as a result of the virus?

We don’t know that exactly either. What we do know is that more severe cases of Covid-19 can also damage the heart muscle, but this has not yet been systematically investigated on the basis of the very sensitive cardiac troponin measurement. Ideally, this would also involve measuring cardiac troponin levels both before and during the disease.

Are there any theories as to how the damage to the cardiac muscle cells occurs?

There are many questions: is the damage triggered by a side effect of the immune response? Does mRNA technology itself play a role? Or specific components of the coronavirus that are used for immunization? Further studies will be needed to investigate this. We only looked at the Moderna vaccine in our study, because it was the only one we had available at the time. Other studies suggest that damage to heart muscle cells is less common with the Pfizer/Biontech vaccine. The difference could also be due to the amount of mRNA used. The Moderna vaccine contained more mRNA, especially in the second dose, and therefore could well have been more efficient, but also caused more side effects.

Not necessarily. More mRNA means more viral protein and thus a stronger immune response. So we can’t yet say whether it’s the higher dose of mRNA or the more severe reaction by the immune system that’s responsible for the damage.

Until now, young men were thought to be the most commonly affected group. Has this been confirmed in your data?

So far, it’s been about severe cases that involved hospitalization. When we look at our data with mild cases, we see this effect more often in women than in men - and not only at younger ages.

How bad are these "mild" effects, as you call them?

We are also exposed to infections like Covid-19 and the flu in the natural course of things, which can also damage the heart muscle. We have to take this into account when weighing the risks and the benefits, especially when it comes to younger people, but this is difficult based on the current data situation. According to current knowledge, the cardiac muscle can’t regenerate, or only to a very limited degree at best. So it’s possible that repeated booster vaccinations every year could cause moderate damage to the heart muscle cells. Due to the heightened occurrence of cardiovascular incidents during and after a Covid-19 infection, we know that the disease itself is causing more severe damage to the heart. For the latter, we have hard evidence.

How do you view the situation with Covid-19 vaccination in children?

Here too, there’s hardly any data. A Thai study has investigated the effect of booster vaccination on the cardiac muscle in adolescents, and achieved similar results as we did in adults. When it comes to younger children, we simply don't know yet. Neither what vaccination does to their cardiac muscles, nor what the disease does.

Cardiovascular patients are one of the groups for which vaccination is recommended. Will the new results affect this recommendation?

No, the recommendation remains unchanged. These groups have a higher risk of experiencing severe cases of the disease with serious health consequences. The high benefit of strong vaccination protection for these groups is not in question.

Some people are still skeptical about mRNA vaccination because they say it hasn’t been tested enough. Are they right?

I wouldn't say that. mRNA vaccination technology is a fantastic development. This efficient protection provided by the Moderna and Pfizer/Biontech vaccines was a medical sensation - without this development, the damage caused by the pandemic would have been so much worse. The vaccines saved millions of lives.

Which questions relating to vaccination do you see as most urgent?

As I said, we don’t yet know the mechanism for how exactly the booster vaccine damages the heart muscle cells. Once we know this, we could optimize the vaccines further so that they ensure efficient vaccination protection, but ideally without damaging the heart muscle. The ball is back in the court of the vaccine manufacturers. When carrying out safety checks on booster vaccinations in future, they’ll also have to take the phenomenon of damage to the cardiac muscle cells into account.

What do you recommend for people who, despite everything, would still like to top up their vaccine protection for the winter?

There’s already a recommendation to take it easy with exercise in the first few days after the vaccination. This definitely makes sense when it comes to avoiding additional strain on the heart muscle during this time and not exacerbating any damage. It has to be said, however, that it hasn’t actually been scientifically proven that exercise would worsen the damage. Unfortunately, we don’t yet have any drugs or methods to prevent possible damage to the heart cardiac cells after vaccination.

Researchers led by cardiologist Professor Christian Müller, infectious disease specialist Professor Manuel Battegay, staff physician Dr. Florian Banderet-Uglioni, cardiologist PD Dr. Philip Haaf and immunologist Dr. Christoph Berger were involved in the study. It included 777 employees (540 of which were women) of the University Hospital Basel wishing to receive a "booster" vaccination in December 2021 and at the beginning of 2022.

On Day 3 after vaccination, the researchers tested the blood of vaccinated individuals for the concentration of the biomarker troponin, which is related to damage to cardiac muscle cells: the more cardiac muscle cells die, the higher the cardiac troponin level. In 22 (i.e. 2.8%, of which 20 women and two men) of them, the researchers were actually able to detect values above the normal range. The proportion of women who showed heart muscle cell damage after booster vaccination was thus 3.7%, while the proportion of men was just 0.8%. On Day 4, cardiac troponin levels had returned to the normal range in half of the women and both of the men.

Vodka, Benzodiazepines & Co: A Dangerous Mix for Young People - 27.10
This site uses cookies and analysis tools to improve the usability of the site. More information. |