’We generate tiny brains in the Petri dish’ 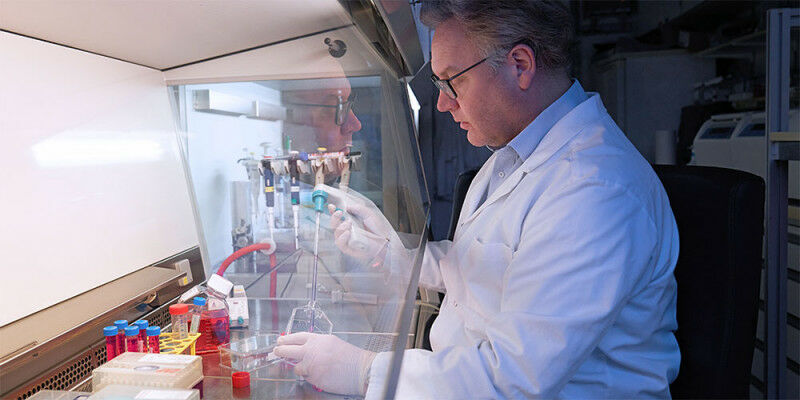 Verdon Taylor: ’We always have to go back to the animal to prove that our results are relevant in the organism as a whole.’ (Photo: University of Basel, Oliver Hochstrassser)

Professor Verdon Taylor from the Department of Biomedicine at the University of Basel studies the development of the brain from stem cells, including using animal-free methods. Here, he explains which research questions can be answered using this approach - and why animal experiments are still needed.

Professor Taylor, what do you and your research group aim to find out?

We investigate how the most complex organ in our body, namely the brain, develops from a relatively simple structure, the neural tube, in the early embryo. Neural stem cells are the starting point for the formation of thousands of different neurons and glial cell types with different functions that make up the brain and the rest of the central nervous system. We want to identify the mechanisms and the signals behind this process. One day, this may allow us to produce new brain cells and replace brain tissue that has been lost due to neurodegenerative diseases such as Alzheimer’s or through injury, or to treat these diseases before symptoms even occur.

You also use methods other than animal experiments in your research. What are they?

We use in vitro methods with neural stem cells that we isolate from the brains of adult mice. Although this requires the sacrifice of a single animal, we can then cultivate the cells and use them in experiments for almost a year. This allows us to generate tiny brains in the Petri dish and generate neurons that can connect via synapses and relay electrical signals. The tissue also contains other types of brain cells, including glial cells and myelinating oligodendrocytes, which form an insulating layer around the nerve fibers.

What type of experiments do you carry out with these brain organoids?

We can isolate these cells from a mouse that has a mutation in a gene, for example. Then we can use organoids to find out the role this gene plays in the development of brain cells. Or we can use stem cells from mice with genetic mutations to learn more about brain development and the causes of diseases. I see myself as a kind of mechatronics engineer for the brain, trying to understand how all the parts work together and how they are controlled. Only when we understand how the brain is built and how it works can we repair it if it becomes damaged.

Although you have access to brain organoids, you still carry out experiments with animals. Why?

When we cultivate cells, we operate within a restricted system with which we can address very precise questions and get very precise answers. But we are not dealing with the same complexity as is found in an animal’s brain. There’s no cerebrospinal fluid, no blood vessels and no communication with the rest of the body. This means we always have to go back to the animal to prove that our results are relevant in the organism as a whole and are not based on artifacts. In my group, however, we don’t do this until we’ve obtained a very solid basis from in vitro experiments.

Is it not possible to simulate this complexity in vitro?

That’s what we’re attempting to do now. We’re already working on producing brain organoids that are permeated by blood vessels through which we can channel fluids. After all, blood vessels and nerve cells are in close contact in the brain, where they exchange oxygen, carbon dioxide, nutrients, metabolic products and information. There’s also the "organ-on-a-chip" approach, where different types of tissue, such as brain and liver, are placed on a microfluidic chip and connected to one another via tiny channels.

In your view, which alternative method has the greatest potential?

We’re now able to produce human tissue in the Petri dish, with no need for animals. To do this, we reprogram human cells, such as blood cells, into pluripotent stem cells from which all kinds of tissue, including brain, skin and heart, can be produced. We can therefore cultivate brain tissue from patients with neurological diseases such as Parkinson’s disease, and compare it with the same cells from healthy people. Alternatively, working in the Petri dish, we can test which drug combination prevents the diseased nerve cells from dying.

Do you believe that these other methods will one day allow research to dispense with animal testing altogether?

In vitro experiments are a valuable approach and they are constantly improving. But ultimately we have to consider the whole organism, with all of the complex interactions between different cell types, tissue and organs. On the other hand, animal experiments also have their limitations, and so we have to use a combination of different methods. It’s like a puzzle. For the time being, at least, I wouldn’t use any drug that had only been tested on a cell culture without also being verified in animals first.

On 13 February, Switzerland will vote on the federal popular initiative "Yes to the ban on animal and human experiments - Yes to research that brings safety and progress". It aims to ban all experiments on animals and humans, as well as the trade, import and export of products, such as medicines, for which animal testing or clinical trials have been carried out.

Swissuniversities, the umbrella organization of Swiss higher education institutions, warns of a medicine and research ban. Accepting the initiative would prevent above all biomedical research and the development of new medical treatment methods. The issues at stake include the high quality of healthcare and responsible research in Switzerland in the service of the population and the environment.