An innovative method for measuring nanoparticles 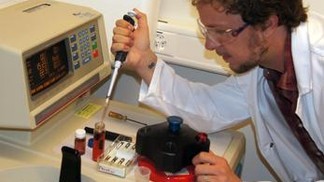 Precise measurement of the molecular weight, size and density of a nanoparticle in a single procedure is now possible, thanks to an ultracentrifugation method.

Although nanoparticles are used in a variety of domains – such as medicine, solar energy and photonics – there is still much about them to be discovered. Establishing their full characterization, including mass, size and density, remains an extremely complex exercise, and this acts as a brake on research in the area. However, this knowledge gap will soon be filled, thanks to the work performed by Francesco Stellacci and Randy Carney, from the Supramolecular Nanomaterials and Interfaces Laboratory. In a recent article, they demonstrate that it’s possible to obtain the complete characterization of a core-shell nanoparticle (the core and the external shell) by using a very simple method – analytical ultracentrifugation. This 100-year-old procedure has previously been used, in particular, to study the size and mass of proteins. It was in applying the method to their area of research that the scientists at EPF Lausanne realized the benefits that could be obtained from its use.

The core and the shell
So far, the analysis of all the parameters that characterize the core, as well as those which characterize the shell of the nanoparticle in a single operation has remained a real challenge. The nanoparticles are indeed polydisperse, which means that, in a sample, each of them has different characteristics (size, mass, weight etc.). “Currently, scientists have at their disposal reliable techniques for characterizing the core of nanoparticles. But this requires five or six very complex procedures to obtain a complete characterization”, adds Randy Carney. “By looking at analytical ultracentrifugation, we discovered a method that enables us, in a single process, to obtain all the required parameters in a few hours.” 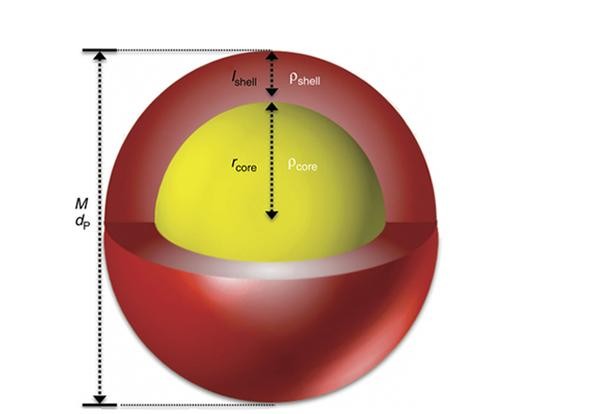 How does it work?
Technically speaking, the concept is as follows: first, you have to dilute the nanoparticles in a solution, and then to put the solution in an analytical ultracentrifuge, equipped with an optical detection system that analyzes their behavior. It’s then possible, using a computing process, to determine what is called the sedimentation coefficient. “When we spin them at a rapid speed, the nanoparticles separate from the liquid at different moments, according to their density,” explains Randy Carney. The biggest particles are thus separated more quickly from the liquid. This observation provides an indication of the weight of the particle, as well as its diameter.” In parallel, the scientists are focusing on another indication – usually ignored by most studies – which is called the particle diffusion coefficient, which relates to the way they spread through the liquid. “This phenomenon, which we can compare with a drop of ink in water, occurs even when the solvent is still.”

Uses in industry
When used together, the sedimentation coefficient and the diffusion coefficient then enable the obtention of a very precise characterization of both the core and the shell of the nanoparticles: that is to say, their size, weight, form and composition. This is very important information, when we consider that the properties of the nanoparticles (chemical, electronic, magnetic etc.) are dependent on all these parameters.
For the moment, this method only works with spherical nanoparticles. However, it should still be of interest for researchers active in nanotechnologies, who can also use it for other nanoparticles, with some additional analyses. “Industry and biological applications also need a method for characterizing nanoparticles. This method could be very useful” concludes F. Stellacci.