Surprising Discovery of Oxygen in Comet 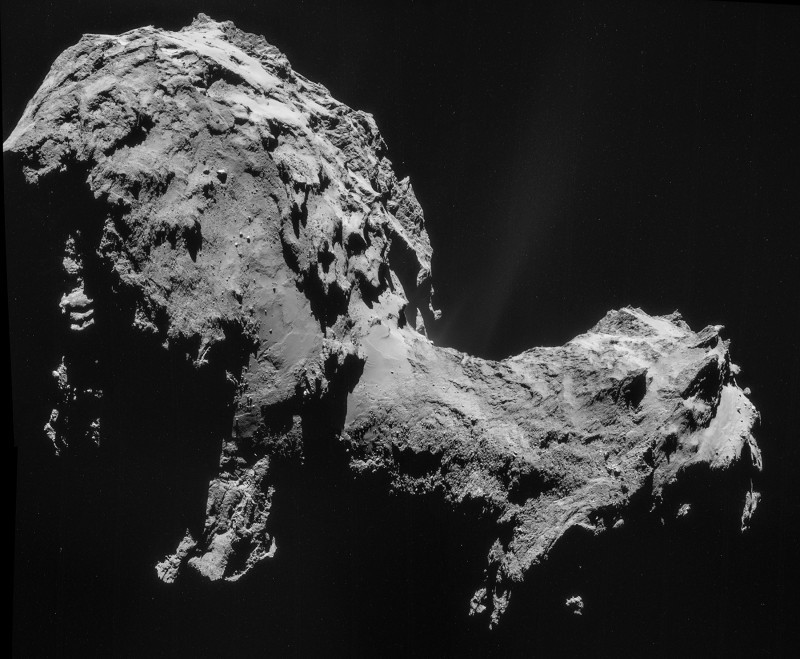 "Portrait" of Comet 67P/Churyumov-Gerasimenko in September 2014, taken with Rosetta’s camera system when the space probe was 28 km from the comet and the mass spectrometer ROSINA was collecting data. ESA/Rosetta/NAVCAM

The biggest surprise so far in the chemical analysis of Comet Churyumov-Gerasimenko’s atmosphere is the high proportion of oxygen molecules. While such molecules are common in the earth’s atmosphere, their presence on comets had originally been ruled out.

Early on in the mission of the ROSINA mass spectrometer, in September of last year, researchers from the Center for Space and Habitability (CSH) at the University of Bern made an unexpected discovery when analyzing the comet’s gases: Between the expected peak values of sulfur and methanol, clear traces of oxygen (O2) molecules were detected.

It turned out that O2 is in fact the fourth most common gas in the comet’s atmosphere, after water (H2O), carbon monoxide (CO) and carbon dioxide (CO2). As oxygen is highly reactive chemically, it was previously thought that in the early solar system it must have combined with the abundant hydrogen then present to form water. Nevertheless, oxygen molecules were present on the comet. “We had never thought that oxygen could ‘survive’ for billions of years without combining with other substances,” says Prof. Kathrin Altwegg, project leader of the ROSINA mass spectrometer and co-author of the study.

Molecular oxygen is very difficult to detect with spectroscopic measurements from telescopes, which explains why this molecule had not already been observed on other comets. An in situ measurement by the ROSINA mass spectrometer was needed to make this discovery. “It was also astonishing that the ratio of water to oxygen didn’t change in different locations on the comet or over time – so there is a stable correlation between water and oxygen,” says co-author Altwegg.

In contrast to comets, it is known that oxygen molecules occur on the moons of Jupiter and Saturn. That is explained by their being struck by high-energy particles from their respective mother planets, which does not exist in the case of Comet 67P/Churyumov-Gerasimenko. The comet has been bombarded for 4.6 billion years, though, by high-energy cosmic radiation particles. These particles can split water, resulting in the formation of oxygen, hydrogen and ozone, among other substances. These particles only penetrate a few metres into the surface, however. In each of its revolutions around the sun, though, the comet loses between one and ten metres from its circumference. Since its last meeting with Jupiter in 1959, which set the comet on its current orbit, it has consequently lost more than 100 metres of its material.

The most likely explanation, according to the researchers, is that the oxygen originated very early, before the formation of the solar system. Specifically, high-energy particles struck grains of ice in the cold and dense birthplaces of stars, the so-called dark nebulae, and split water into oxygen and hydrogen. The oxygen was then not further “processed” in the early solar system. The oxygen measurements show that at least a significant part of the comet’s material is older than our solar system and has a composition typical of dark nebulae, from which solar nebulae and later planetary systems originate. “This evidence of oxygen as an ancient substance will likely discredit some theoretical models of the formation of the solar system,” says Altwegg.

Getting hydrogen out of banana peels - 26.01
Scientists overcome a hurdle on the path to renewable-energy storage - 14.01