Startup brings RNA sequencing into the age of big data 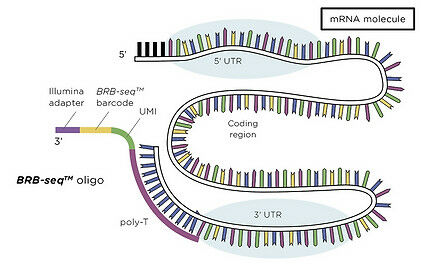 The core principle of this technology is the use of highly optimized sets of barcoded primers, the BRB-seq oligos. They are used to "tag" individual RNA samples in a unique and sample-specific manner. The oligos are optimized and validated to enable the generation of consistent, reproducible and uniform RNA sequencing data. (Source: Alithea Genomics)

EPFL spin-off Alithea Genomics has developed a system that allows scientists to easily tag bulk RNA samples with molecular barcodes so they can be processed by the hundreds in one single tube. The technology promises to dramatically shorten and streamline sample preparation for RNA sequencing, which will enable new applications for this technology, such as biomarker discovery and drug development.

RNA sequencing is becoming a key part of the process of developing new drugs and discovering biomarkers, which indicate the presence of certain diseases. Armed with a snapshot of RNA strands - the messengers that carry DNA information - scientists can gradually decode intracellular "language", detect anomalies and learn how to repair them. In order to extract insightful statistics, train artificial intelligence systems to identify abnormalities, and fast-track R&D, a new approach is needed - one that enables the generation of "big RNA data", so that the functional state of thousands of samples can be profiled and compared simultaneously, at a fraction of the time and cost.

That’s where the technology developed by EPFL spin-off Alithea Genomics comes in. It "tags" RNA strands from hundreds of samples, allowing them to be analyzed in one single tube, instead of hundreds of tubes! This process is 25 times cheaper than conventional methods and reduces the time needed to sequence hundreds of samples from several days to just a few hours. The startup, which currently employs seven people and raised CHF 1 million in May this year, is preparing to launch new products and upscale manufacturing.

Next-generation sequencing has long been used to analyze DNA but is trickier to apply to RNA. This method involves combining samples from multiple sources and sequencing them in a single pass, saving both time and money. One of the key steps in this high-speed process is the preparation of a genomic library. At this stage, barcodes - short, predetermined sequences of DNA - are added to identify fragments belonging to the same group. Then, once the fragments have been analyzed, they can be reassigned to the correct sample using a special software program. This system works in much the same way as an airport baggage sorting system, which directs items of luggage to the right aircraft.

Scientists are accustomed to preparing these kinds of libraries for DNA samples, using standard kits selected according to the cell type and sequencing system in question. But with RNA, although the steps of the process are generally similar, the samples are typically analyzed one-by-one in order to overcome specific difficulties and inherent biases. However, the process developed by Alithea Genomics, called Bulk RNA Barcoding and sequencing (BRB-seq) which was described in a 2021 paper in Genome Biology, enables scientists to quickly and easily prepare and barcode RNA samples for the simultaneous sequencing of up-to 384 samples in a single test tube. In addition to cutting costs and shortening analysis times, Alithea’s process significantly reduces the amount of plastic and chemical compounds required.

Once a sample has been sequenced using conventional machines, the data are run through a proprietary cloud software program that assigns the strands to the correct genome. "Our software is currently available online and it is free-to-access for all BRB-seq users," says Riccardo Dainese, CEO of Alithea Genomics.

BRB-seq was developed by EPFL’s Laboratory of Systems Biology and Genetics (LSBG) to support its own research, after the group was unable to source existing technology that met its needs. The method, which is now being marketed by Alithea, has already been used to successfully analyze adipocyte messenger RNA as part of a study on the expression of mitochondrial genes in fruit flies, with the goal of assessing the efficacy of targeted cancer therapies and gaining new insights into the circadian rhythm. Other research groups, including top pharma companies, have since expressed an interest in the method. "It is very exciting to see that our technology is starting to open doors for the widespread application of RNA sequencing beyond fundamental research and towards industrial applications", says Dainese.

Because Alithea’s system lets scientists analyze many more samples at a given cost, it paves the way to wider-ranging and more reproducible experiments. More generally, the application of big-data principles to RNA sequencing will be vital to achieving rapid progress in transcriptomics, a field that focuses on the study of the transcriptome - a snapshot of all the messenger RNA in a cell at a given moment in time. Unlike an organism’s genome (i.e., the DNA contained in the nucleus of a cell), which is generally stable and specific to that organism, the transcriptome varies with time, the type of tissue and cell, and various environmental factors. Vast datasets will allow scientists to extract useful statistics and insights into the RNA present under specific circumstances, furthering our understanding of how cells function. Ultimately, such biomarkers could be used to diagnose diseases and develop new drugs.

The CHF 1 million that Alithea raised in May will be used to help market its technology, extend its kit to cover new applications, and customize its analysis software.