A material that can learn and remember like the brain 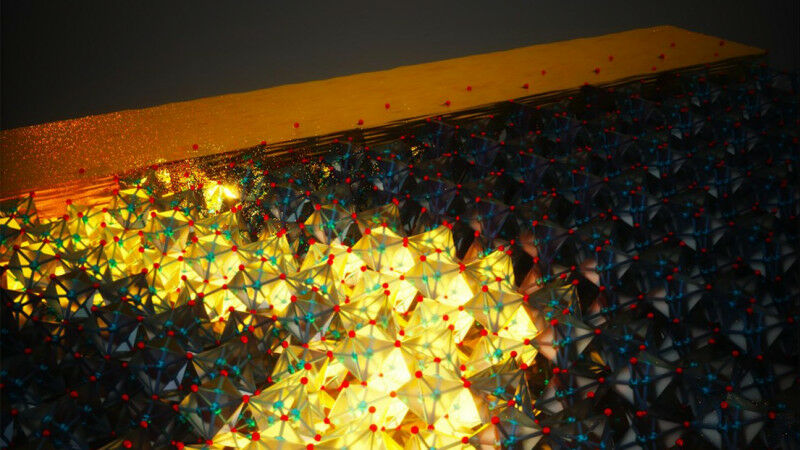 Vanadium oxide (VO2), a material that has the ability to remember the entire history of the stimuli it receives. POWERlab / 2022 EPFL

EPFL scientists have found that vanadium oxide (VO2), a material used in electronics, has the ability to remember the entire history of the stimuli it receives. This is the first material to be identified as such, but there may be others.

This discovery was a fluke. Mohammad Samizadeh Nikoo, a PhD student in the Power Semiconductor Devices Laboratory (POWERlab) , wanted to study the transition of vanadium oxide (VO2). Without load and at room temperature, it exhibits an insulating phase. When it is energized and heated to 68 degrees Celsius, it transforms into a metal. Vanadium oxide has a typical volatile memory: "The material returns to its insulating state as soon as you stop the electrical stimulation," the scientist explains.

The goal of his doctoral thesis was to observe the time it takes this material to transition from one state to another. However, his research led him to a different goal. Through several hundred measurements and calculations, the scientist found that vanadium oxide has a long memory related to its structure.

For his experiments, Mohammad Samizadeh Nikoo passed an electric current through a piece of vanadium oxide. "An electric pulse passes through the material and continues its path to the exit," the scientist explains. During this passage, the material completes its transformation as the current heats it, and then returns to its original state once the current is over. The researchers found that the time it takes for the vanadium oxide to change its nature as a result of the second electric current applied to it is directly related to the stimulus history. "It remembers its last transition and anticipates the next one. This is an unexpected memory effect. This is not related to electronic states, but to the physical structure of the material. This is new from a scientific point of view, because no other material behaves like this," says Elison Matioli, professor and head of the lab.

Up to three hours of memory

The scientists were able to verify that the material remembered the last stimulus received for up to three hours. "If it remembers it for that long afterwards, we can say that this memory can last for several days, but currently we don’t have the measurement tools to prove it," explains Elison Matioli.

Why this discovery is so important - In this situation, memory is a property of the material itself. In any kind of computation, engineers resort to memory. These days, they want high-capacity memories that are fast and small. Vanadium oxide meets all three criteria. In addition, its memory is structural and continuous, rather than electronic and binary, as is the case with conventional memories.

To arrive at their results, the scientists had to perform a large number of measurements. They also applied their new measurement techniques to various materials from other laboratories around the world to validate their findings. This discovery replicates well what can happen in the brain, as the vanadium oxide "switches" act like neurons.